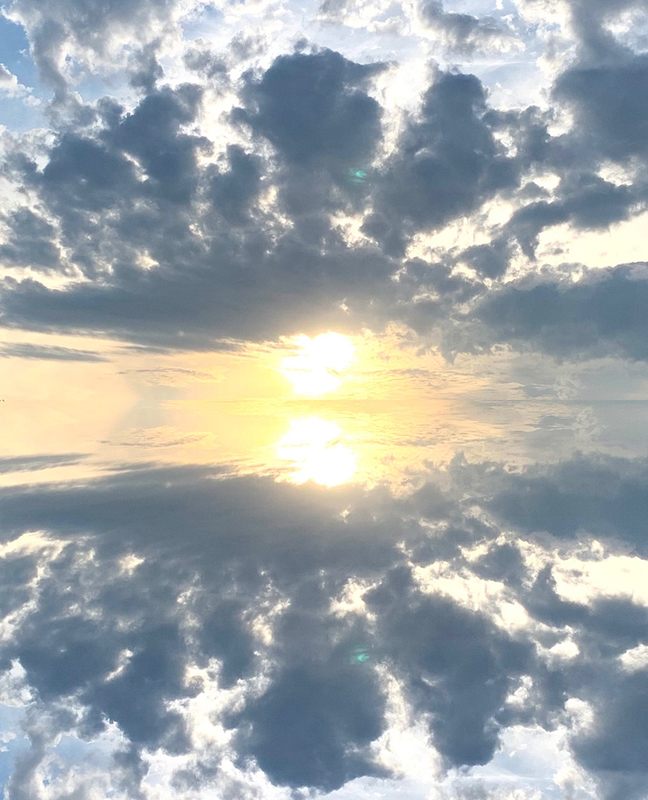 Lake Superior has been an outside studio, teacher and inspiration for me since 2006. This ongoing nature collaborative "Untitled dialogue" series works are made by sitting on the shore and using the Lake's waves as a medium in this work. Making marks and having Lake Superior make hers. Everyday I have something different to learn and understand, to capture each moment, each color nuance, each mood. All of my watercolor paints are non-toxic, some are natural pigment paint I've made myself from local pigments.

My artwork is a practice of changing focus. Encounters where nature and my materials present themselves to each other and the interaction becomes documented. For the past 21 years, my ongoing “Untitled dialogue” paintings are collaborations with nature made using non-toxic, water-miscible pigments and painting in the rain, snow or at the water’s edge. These Superior Shoreline paintings are unique because each piece is painted outside along the North Shore, at the waters edge, using the water and waves themselves to paint the mood of the Lake Superior at that moment. These dialogues become a beautiful imprint of capturing that moment. I believe the more we can listen to nature the more we can learn about ourselves.

ELEMENTAL EARTH ORACLE DECK
Abstraction holds deep meaning. It becomes the language of energy, imagination, and the unseen. This 45-card, Elemental Earth Oracle Deck was made following a soul way of seeing, of using color, intuition, marks, and the vibration of nature’s voice added to each piece of sacred art. Used as metaphors, the Earth’s natural processes, phenomena, and events of beauty like wind, rain, and moon halos can be used to guide us. They can give a deeper understanding of our own growth and cycles, and help us align with our soul’s purpose and connection. The powerful imagery and the meanings of these cards are made to guide you in your readings for activation, inspiration, healing, and creative wisdom.

If you are interested in purchasing a deck please send an inquiry email to thepaintedmessage@gmail.com Decks are $44. plus shipping to USA only.
HIDDEN FALLS 2015-2016
In this series I worked to capture the moment by immersing the canvas into the swirling, powerful waters of the Temperance River, and then spent two years of building up layers of history and paint around each unique path the river had left on the canvas. The power of the rushing water carving the stone served as inspiration and energized my work. The waterfall moment is reflected in the way nature's marks cut through the layers of paint and various other mixed mediums I built up in the studio the way the waterfalls cut through stone.
CONVERSE VARIATIONS 2012-2014

The paintings in this series were started in the unique landscapes of Lake of the Woods, Ontario, where I work each year. The ink washes are based on the lake's movement—variations on canvas recorded at that moment paired with almost two years working time in the studio to slowly study and converse with the marks left behind. Rhythm, memory and time work together to create pieces that show both the impressions left by nature, and the story of my response.

The interpretations of primitive art, culture, or methods in this series are an attempt to bridge time and to connect in a spiritual way to the ancient world. Drawing from the natural environment at several regional sites largely untouched through time these works represent an attempt to reach deeper into the world of our predecessors. The artworks use natural materials when possible and were created using primitive methods, such as wood fires, rubbings and water found on site yet also incorporate modern methods or materials to create a link between the two environments.

This series consists of drawings and paintings started when I was left on an island on Lake of the Woods, Ontario, Canada the summer of 2010. I started working by taking rubbings of the giant granite rocks, and drawing from the natural elements on site, namely a black lichen which I believe to be Staurothele clopima. Then I partially submerge the paper or canvas into the lake creating a more direct interaction with nature. The drawings were left in their initial state, with only the addition of the black lichen reference, and the paintings were left nearly unchanged under the resin areas, preserving that moment completely.

Also in this series are works I started in the Caribbean Sea in Negril, Jamaica in May of 2008. I worked first by taking rubbings of the sand, incorporating the surrounding colors and drawing from the natural elements on site. Then I partially submerged the linen in the sea to begin the dialogue. The charcoal and wax drawings were started in the studio in 2010-2011 referenced from memory from my visit to the open sea.

This series consists of works started in the rain or water in Denali National Park, and Healy, Alaska in the spring of 2008.